How long will it take to get my enclosure?

We try our hardest to keep on top of our orders, but turn around time really depends on the season. With our wooden enclosures, we can normally get it built within 2-3 weeks. If it is in prime season, Holidays or income tax season, it could be from 5-6 weeks. With our fiberglass enclosures, like our Rams, we have a longer wait, normally close to 4-5 weeks, or longer during our busy seasons.

We’re a small shop and all of our enclosures are made to order, and quality is our main concern. If you do make an order and want an update, feel free to ask about it and we can give you an update. We just ask for patience and promise that we are doing our best to get your products out to you as quickly as we can.

Why do ported boxes cost more than sealed?

We spend a lot of time on the design of every one of our enclosures and building every order that we get. But, even more time is spent on our ported enclosures. Every ported box that we build is different and is based on the needs of that application. We take the specs of our enclosure and of your subs and load them into our subwoofer program. There, we work with the dimension of the port size and length to get the the desired tuning, we typically prefer between 35-38hz, but we do reference the manufacturers recommended specs to see what they recommend.

We always compare our ported box to the recommended sealed box for the sub so we can see what we are gaining between the two. Sometimes, due to space limitations, sealed may actually be a better option for what you are wanting, and that comparison is the only way for us to know that.

When we design your ported box, we take into consideration not just the tuning, we also watch to make sure that there isn’t any port noise and that the subs are playing within their safe mechanical limits. So the extra cost is to cover the design time and the extra fabrication time. And as an extra bonus, with our ported boxes, we try and use the port as bracing inside the box to help reinforce the box even more than we normally do. All part of an engineered package to make your subwoofer system perform to it’s fullest. 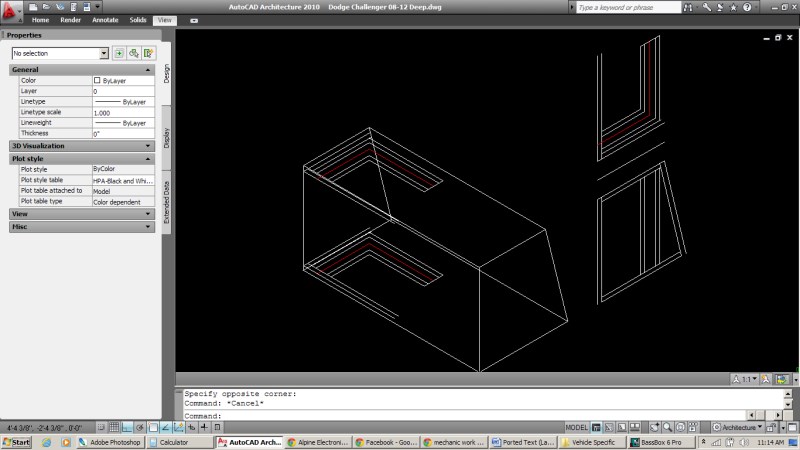 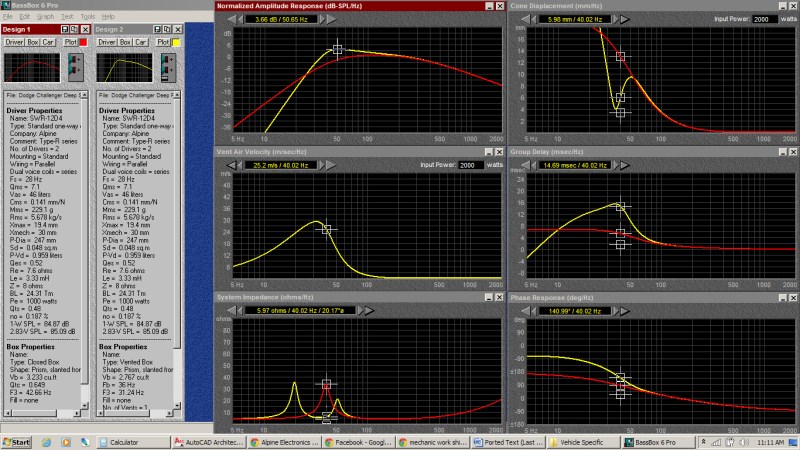 Will my subwoofers fit inside this box?

This has to be the second most frequently asked question that we get. We try very hard to list all the information you need to tell if your subwoofers will work in our boxes. We list mounting depth and the internal airspace of all of our boxes so that you can tell if our enclosures will work with your equipment.

Airspace is listed as the entire enclosure’s internal airspace. That way, we can choose 1, 2, 3 or even 4 subs in that same airspace. Then that space get’s divided by the number of subs that are going in there. Since all of our boxes are made to order, and typically customized to your needs, this way we can show what the options are possible with the total room available.

And mounting depth is based off of a 6″ diameter magnet on the subwoofer. If the magnet is smaller, then we will have more mounting depth available. And if it’s a wider magnet, less room is available. Most of our boxes have angled faces, so that is why the magnet size is so important to mounting depth. 8s will have way more room than 12s, because the space of the box where they will go will be lower and larger than what a 12 will. So we try and give that information for you to compare your equipment to.

Every vehicle has it’s own challenges, and we try to get the most space out of every vehicle that we can, but sometimes there are limits to what is possible.

How do I know if the box will fit my vehicle?

We get a lot of call and emails asking about the boxes fitting the cars, and I get that. There are a lot of differences in car models and packages and some products will say they fit and then won’t. We put a lot of time and research into our box designs and do everything we can to ensure their fitment in the vehicle and what other things in the car that can affect the way that the box will fit. We list lots of information on our boxes to make sure you get the options needed to fit your vehicle. If there is an issue, be sure to get with us so we can figure out what the problem may be.

Do I want a Sealed or Ported box?

This is a complicated question, and a question that I can’t answer for you, but I can try and point you in the right direction, so I will try and keep this as straight forward as possible.

There are two main boxes that we deal with hear, sealed or ported enclosures. A sealed box is the simplest design and sound wise they are the most musical. They will sound tight and punchy but will still have the ability to play deep bass very cleanly. If you listen to a broad mix of musical styles, I personally recommend a sealed box so that the bass is more equal as you go from genre to genre. If you after musical precision and accurate bass, then you will want a sealed box.

A ported box on the other had, will deliver more deep bass and generally have a boomier overall sound. If you listen to more bass heavy music, then you will probably want ported. If you want the loudest thing you can and like to piss old people off, then you definitely want ported. But ported boxes, compared to sealed boxes, are going to be way bigger, generally almost twice as big. So in some cases, what you may want, may not be able to fit. So in cases like that, get with us and we can give you some recommendations.

Now some vehicles, really work best with ported boxes because of the acoustics of the vehicle. Jeeps for example. Any vehicle that is a soft top, like Jeeps and Convertibles, really work better with ported boxes. Sealed boxes rely on the small space that the cabin of a car creates, where ported boxes shine with more air around them. They still work great in a cabin and that just makes it even louder, but with an open air environment like a Jeep, a ported box will help get you output when the top and the doors are off.

So, which is for you? Unfortunately I can’t tell you that. I would recommend listening to friends vehicles and seeing what they have or stop by your local audio shops and listen to their displays. It really all is a preference in sound. I can tell you what you “should want”, but if it isn’t what you like, then we didn’t do our job. The audio purists and old school audio guys will tell you that if you listen to country and rock, then you want a sealed box and 10s. If you listen to rap, then you want ported 12s. But personally, I prefer listening to metal with a big ported box because I like the way it makes the subs sound. I am ok with loosing a little punch for the boom that it gives the kick drum. It really is a preference on what sound you like. I can point you in the general direction, but the end choice really comes down to what you like.

Why is shipping so much?

This has to be one of the most common questions that we get, and trust us, we get it. We constantly are working with FedEx to get our shipping rates better, and we immediately pass that discount on to you. Whatever discount we get, is what you pay through the website, along with a little more shipping discount that we apply on our end. Anything we can do to soften that part of the order, we will do. We get it, shipping sucks and it’s not a fun part of the order, but it is a necessary evil.

It’s not that bad on the harnesses and spacers and smaller parts that we make. But some of these subwoofer boxes are pretty much like shipping a refrigerator. So it’s going to be expensive, no matter what. If you would rather pick it up locally, please contact us and we can get it all handled for you.